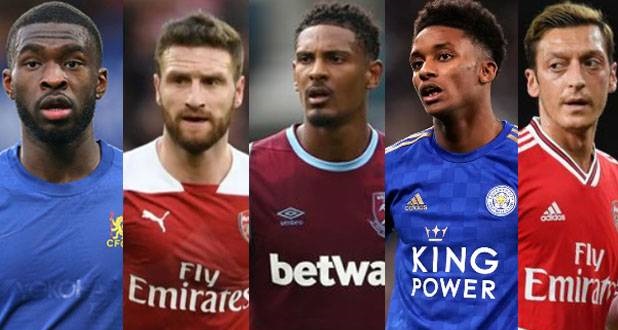 The winter transfer market for 2021 was officially closed, Tuesday (2/1/2021). The English Premier League has become a busy competition. Several clubs are actively signing and releasing their players in the January 2021 transfer market.

Several clubs will take advantage to improve the strength of their squad to remain qualified in the Premier League. However, not a few also have to leave the most prestigious competitions in Europe, including players who have the title of being a star.

Here are five-star players who left the Premier League competition in the January 2021 transfer market, as quoted from various sources, Tuesday (2/2/2021):

Fikayo Tomori is on the list of players who have left the Premier League competition in the January 2021 transfer market. He was loaned to AC Milan with a purchase option at the end of the season. Many have called Chelsea too reckless, so they let go of their young talent with the purchase option so that AC Milan benefited from this transfer.

Shkodran Mustafi has signed a short-term contract at Schalke after leaving Premier League club Arsenal. The German defender will play for six months in his homeland. Mustafi failed to secure a place at Arsenal and was only three of his 2020/2021 Premier League appearances after recovering from hamstring surgery. He arrived in Gelsenkirchen as a replacement for Ozan Kabak, who joined Liverpool.

The Dutch team Ajax Amsterdam officially brought Sebastien Haller. They paid a fee of 22.5 million euros to brought him.

He scored 51 goals for Utrecht between 2014 and 2017 and revived his relationship with Ajax coach Erik ten Hag.

German Bundesliga club Bayer Leverkusen signed Demarai Remelle Gray from contestant Leicester City for an undisclosed fee. The 24-year-old’s contract with the Fox will expire in the summer. Demarai Gray has made 133 appearances for Leicester City in the English Premier League.

Mesut Oezil officially left Arsenal for Fenerbahce in the winter transfer market of 2021. Fenerbahce itself is one of Oezil’s dream clubs since he was a child. Understandably, despite having a German passport, Oezil is known to have Turkish descent from his parents.